Breeding and Research on Key Techniques of Orchids – Research on Flowering Regulation of Paphiopedilum.

Achievement：As regarding the establishment of the regulation technology of the flowering of Paphiopedilum orchids, the treatment of 'GA 125ppm + BA 62.5ppm' treated in two species of maudiae type species, including Paph. appletonianum and Paph sukhakulii can make the highest rate of emergence of the flower stalk (93% and 80% respectively). Meanwhile, GA can also promote early flowering of them, but the flowers cannot fully open, and the proportion of flower malformation is high. In addition to the influence of chemicals, it is speculated that it is also due to the lack of plant maturity. If the effects of BA and TDZ treated with GA compared, BA was slightly better. 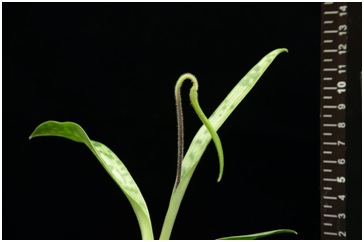 ▲Fig1.GA could increase the rate of the flower stalk emergence of Paph. appletonianum. However, most of the flowers could not open normally.

▲Fig2.GA could promote Paph. appletonianum flowering earlier but the flowers stalks were thin and curved (A), and the plant also elongated. When BA (B) or TDZ (C) added, side effect of plant elongation reduced.