Foxtail orchid plants ( Rhynchostylis) is named for the drooping long inflorescence that resembles a fluffy, tapering fox tail. The plant is distinctive not only for its beauty and unusual range of colors, but for its distinctive aroma that is released in the evening when temperatures are warm.

The genus name of foxtail orchid is a synthetic word of rhynchos (mouth) and stylis (gynostemium) in Greek, because it has a core pillar, "rostellum" shaped like a bird's beak. Foxtail orchid is a member of the orchid family (Orchidaceae) belongs to monopodial-type, native to the Indian, China, Indochina, Malaysia, Indonesia and the Philippines, consisting of 3 common species . There are a lot of different and varieties of Rhynchostylis gigantean: flowers vary greatly in shape and color (from white to dark red, with spotted forms). The inflorescences appear mostly in autumn and winter. Rhynchostylis coelestis has upright sprays of many small, white and lavender-blue flowers and inflorescences appear mainly in summer. Rhynchostylis retusa has long panicles of pink and purple which blooms during the later spring. The unmistakable strong fragrance is consistent across this genus, whether the species bloom in the winter or summer.

Foxtail orchid is also used as aromatic orchid donor parent for cross-breeding as well as involving in hybrid foxtail orchid . They are introduced to increase the amount of orchid varieties. With continuous innovations in breeding of new and better varieties, plant variety protection is becoming increasingly important. According to “The Plant Variety and Plant Seed Act” 2005, new variety right can be granted when candidate variety has new, distinct, uniform, and stable characteristics that can be proved by Distinctiveness, Uniformity and Stability (DUS) testing which is following test guideline and legal testing procedures that operated by authorized agencies. Taiwan Seed Improvement and Propagation Station, COA (TSIPS) is aggressively developing DUS test guideline for foxtail orchid. It will be beneficial to the owners of new varieties to apply for plant variety rights. In this way, intellectual property rights of breeders’ painstak can be protected and it can also promote new varieties to be created .

TSIPS indicates that l ots of Rhynchostylis gigantean are blooming this moment. There is a foxtail orchid show in Nantou which collected more than 50 species of foxtail orchid and also display some common species . Everyone is welcome to visit the show and appreciate the colorful and st rong fragrance foxtail orchid (Fig.). 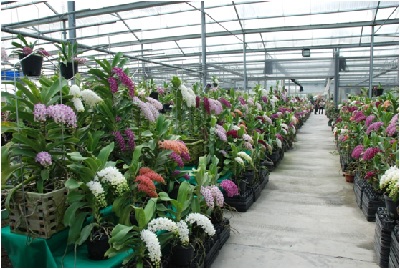