Cocoa is one of the emerging crops in Pingtung county, Taiwan. Farmers mainly cultivate the seedlings of cocoa trees. Varieties difference with good or bad performance in the field always cause difficulties in cultivation. Furthermore, the subsequent problem is difficult to control the quality of fermentation and processing.

In response to industry needs, Taiwan Seed Imporvement Propagation Station (TSIPS) has begun to cocoa research since 2017. The first thing they want to do is to increase farmers' income by improving the cocoa production. TSIPS said, farmers can effectively improve the yield of cocoa by grafting high yield cocoa branches to field plant or to cocoa seedlings as rootstock.

The grafting technology established by TSIPS can be applied to both cocoa adult plants and 2-year-old cocoa seedlings. The first step in grafting method is to cut off one side of the semi-lignified scion bark to formation layer of the rootstock, and the other side is chamfered 30-45 degrees. After removed the upper branches of the rootstock, the next step is to make a longitudinal cut in the rootstock along the formation to be equal to the scion's cut-off length. Then, insert the scions into the cut at the top of the stem of the rootstock, tighten it well with tape and cover the scion with paraffin. After grafting, the grafted plants are supplied with limited the water and keep them it in the semi-shadow area for seedling wound recovery.

Cocoa trees from South America originally, spread throughout this region to the world and mainly is planted in Africa. The data indicates that cocoa has been planted in Taiwan since Japanese occupation period. However, the industry gradually declined due to the immature processing technology. Until the 2000s, the fermentation as a key step in cocoa processing was introduced and yielded good quality chocolates which made from tree to bar in Taiwan Pingtung won in the international chocolate competition. In recent years, the "Pingtung Cocoa" industry has gradually spread far and wide. 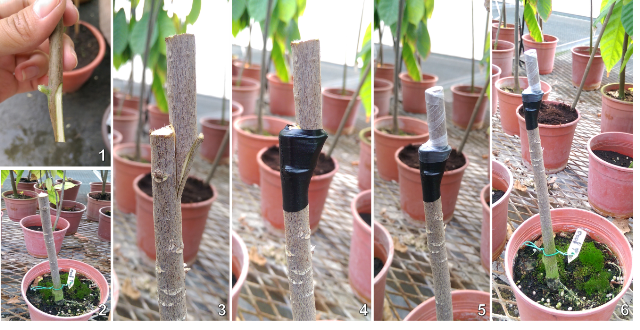