Seed testing Laboratory (STL), which is accredited by International Seed Testing Association ( ISTA ), has moved to Plant Seed and Seedling Center Building of Taiwan Seed Improvement and Propagation Station (TSIPS), which address is No.6, Xingzhong St., Xinshe Dist., Taichung City, since March 16 th 2016. Neither seed-producing farmers nor seed companies were suspended for all service of seed testing during the relocation.

Seed testing is a n important step of seed production process . I n order to ensure the seed quality for cultivation and marketing , STL was founded at Taichung District Agricultural Research and Extension S tation (TDARES) in 195 9 to implement seed testing projects. STL was initially under the jurisdiction of the former Section of A gricultural Production , Agricultural and Forestry Division, Taiwan Provincial Government and was responsible for testing cultivation seeds and seedlings . T wo years later, it was renamed as Seed Technology Office. TDARES mov ed to Changhua in 1978, and STL also moved to Taiwan Agricultural Research Institute (TARI) . T he Seed Testing Building was establish ed in Wuf eng, Taichung County I n 1985 and then STL mov ed again in 1988. In July 1999, STL was modified under the jurisdiction of the former Central O ffice of Council of Agriculture (COA) and STL came under the Agriculture and Food Agency (AFA) of C OA from January 30 th in 2004. Since June 1 st 2012 , owing to the future reorgani zation of government, STL was regulated again to be under the TSIPS and, according to the principle of user charge, started charge for seed testing since January 1 st 2015 . On March 16 th 2016, STL formerly moved to Plant Seed and Seedling Center Building of TSIPS.

Dr. Tso-Chi Yang, the Director of TSIPS, said that STL became a member of ISTA since 1962. Now, there are 218 member laboratories, 41 personal members and 62 associate members around 80 countries. STL is ISTA accredited laboratory and the tests of STL include sampling, determination of moisture content, purity analysis, germination test and so on for domestic good seeds production and issuing seed certificates. STL will also intend to do the seed health testing for important seed-borne pathogens on exportable crops. STL needs to be audited by ISTA triennially and will be audited the sixth time in June this year to maintain the quality assurance and qualification of issuing international seed certificates.

Mr. Han-Tsu Shen, the supervisor of STL, indicated that the project of domestic good seeds production has conducted for decades and many crops, such as paddy rice, peanut, sorghum, maize, potato and asparagus bean, are included in this project. Especially on paddy rice, STL do the testing for rice seeds of each level so that farmers not only have high-quality rice seeds to use, but also manage the cultivation of paddy rice precisely and effectively and furnish people with the best quality rice all around the world.

STL will keep conduct researches on seed testing in the future. Under the government’s plan for global seed industry, STL will assist seed-producing farmers and seed companies to produce and export excellent seeds and make the world recognize the high seeds quality of Taiwan. 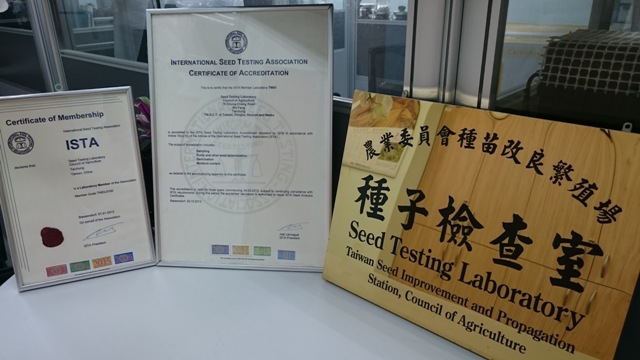